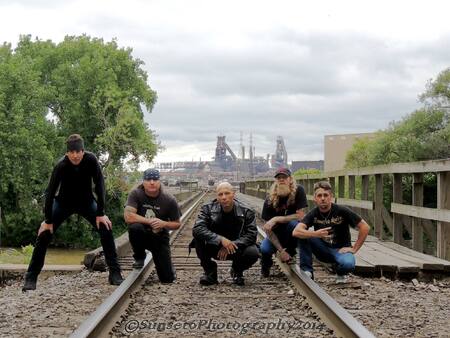 Finally a band delivering Us-metal the way it is supposed to be! Hello, welcome to Norway and congratulation with a great debut!

"Thank You!! We are very excited and happy with Firebreather."

I'm an oldie, still strongly into the nwobhm and the general 80-s metal scene. You guys ar genuine oldschool heads as well?

I red something on you doing the metal rounds back in the 80's, what does your cv looks like? What have you been up to and when did it all start?

"All us members in Sunless Sky have extensive history here in the local Cleveland Ohio area. With a couple members getting signed and doing overseas stuff back in the 90’s. Juan Ricardo our vocalist was in Ritual, our bassist John Jerman was in Embaler... We all have known or played with each other since we started back in the early 80’s."

Can we get the fast food version of your biography?

"Sunless Sky came about after Harry Hillock our guitarist got in touch with Juan (A powerhouse vocalist in the Cleveland metal scene) a little over 2yrs ago. They traded some songs that Harry had from a longtime previous project called Erecto-Jector. After rewriting and tweaking the existing material…. Sunless Sky was formed. After their very first show they replaced the drummer and the rest is history…. Ha-ha, the new drummer Robert Brandt ...ME!!

After I learned the existing material we started writing new songs. When then bass player Kenny Finch developed back problems he was replaced by John Jerman. We entered Brainchild Studios  in Lakewood Ohio last year and started the album. After a very very long snowy winter here in Cleveland the album was finished this spring."

Your metal is of high standard, no doubt. The songs are strong, the sound is suiting and the album really shines. Have you been getting a lot of great reivews? Or is it difficult to get your musical message through in 2014? Are the magazines and the music buyers capable to see the quality you are offering?

"We are just starting to get some awesome reviews, album doesn’t get released for a couple more weeks… With an awesome label like Pure Steel Records we are very happy with the way our album is getting to people before release….Getting responses from all over the world is quite humbling!!!" 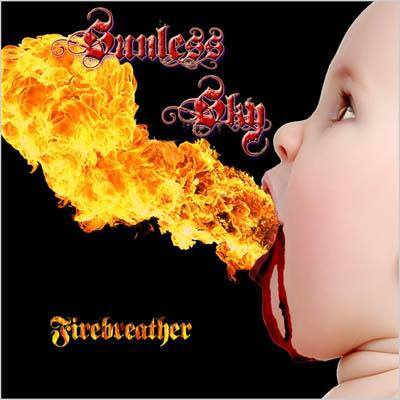 If there's one element I didn't like, it was the cover. Arggh! What is the thought behind the picture and the title? And sorry if I'm too forward, just the way I am :).

"Never be sorry for being honest!!! Some people love the cover, others hate it, but it is exactly what we wanted!!!! It makes you look twice!!!! We let all the music do the talking….When you hear our vocalist Juan you will know why the album is called Firebreather. Let the masses decide if its a good one….. Only time will tell."

Pure Steel is releasing a lot of albums, with an uneven quality range. Sunless Sky I feel is the band defining the label, its name and mission. Did you stalk them and force them to sign the band? Or was it them chasing you?

"Wow! Thank you!  Thats quite a statement. I definitely stalked them with a name like Pure Steel Records, how much more metal can you get? We are very pleased to be working with them and honored for them to release our debut album. We hope to make them very happy as well!"

Where do you think Sunless Sky will hit the hardest? Europe or the Us? What does the feedback tell you so far?

"Tough question. I believe we will have a better response over seas, it just seems to be that way, but we like to go and play anywhere and everywhere. We are a very hard working band and the response to the live shows are incredible so if the right hands get this album we could break the US."

I have to know your favorites from the 80's. What bands/albums are resonsible for you being a metal head?

"For me personally, early 80s Ac/Dc, Van Halen, Scorpions, Zeppelin, mid to late 80s to being a metalhead, Megadeth, Overkill, Anthrax, Slayer, to hard to name, I love so many..:)."

And what bands are the inspiration for Sunless Sky?

"Yes we love all the classics, the 90s was cool, but for me I was too fucked up to be inspired…"

I just got the disc, no lyrics. What is your message? If any? Are the lyrics just...lyrics?

"We have some very cool lyrics. Juan is the man, who else can write lyrics about hunting whales.. The Whaler, we have Subzero about the arctic cold. Juan has over thirty years of writing very interesting tales of beyond."

Are there other american bands, similiar to Sunless Sky? Bands we need to check out?

"We hope not!!! Just kidding, yes the metal scene is thriving with unsigned talent. We have local labelmates Wretch releasing their album very soon. Check them out!!!"

Love it, the band, the album!! Thanks a lot for your time, I really hope you guys break it big! Any final words? Anyone important to the band in need of some credit? Someone you dislike, someone making your life miserable? :) Clear the air here:

"Thanks for the kind words. We really appreciate the response and hope to someday play abroad so you can witness a Sunless Sky show live. We are very happy to be on Pure Steel Records and wish all a great evening. No one can make your life miserable unless you let them… Not happening in Sunless Sky world!!!! thanks so much, peace!!"