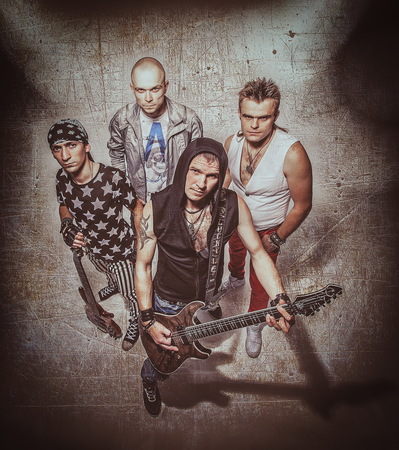 Vadim: "Hello! We are glad to meet you! Norway is a great country with ancient and rich culture. Your nature is incredible. Definatly, we will come to your country for permanent residence =) Life is good! This is the most beautiful thing in the universe. It can not be bad :).

Usually I can spot a band from certain parts of Europe, be it from Russia, Italy or eastern Europe, usually a weak english pronouncement is the revealing factor. But Estate pretty much manage to avoid these traps, have you been working a lot on this? Or does it come naturally?

Dmitriy:  "This is entirely the merit of Alexander (our friend and guest vocalist) and Bogdan (our translator and lyrics writer). Actually, Alexander was chosen for the role of lead vocalist on the debut album due to his great experience of the recording of English songs and pronunciations. After working with him I got a new view on pronunciation and metal vocals, though I can't say that I am just beginner in music and vocals. As a permanent frontman I had to try my best and work hard to record vocals on You Are Not Alone for our music video. Of course it's turned out differently, but not worse, I hope."

Vadim: "Dmitriy is right. But I want to add that we have to work hard to learn English. One of the most important and immediate tasks for us is to learn English perfectly. Without English there is no way in today's music world and business."

Your music is pretty much trapped in the 80’s, though the promtional letter also mention the 70’s. Why did you choose to look back in time when you picked your style? I did grow up in the late 70’s myself, so no complaint from me...

Vadim: "In my opinion all the best music in pop and rock culture was created in the period from 80's to 90's. We grew up with this music and, of course, it is strongly influenced us and our music creativity."

Dmitriy: "I can say that I swallowed heavy metal of 80's with my mother's milk and with the first bottle of beer. This style always will be the most beautiful and meaningful for me."

The album was varied, sporting both ballads, rockers and some heavier power metal stuff. Did you do this deliberately? To record a varied album?

Dmitriy:  "Yes. Although we imagine that it will confuse some adepts of these styles. We decided not to be bound by some frames and templates, the world is already full of them. Million identical bands. It's a real pleasure to do what you feel, to admire the musical taste of our comrades and colleagues who bring something else and new to the music."

Vadim:  "Yes, we risked knowing that someone will like this and someone will not. But at that time we wrote something that we felt and something that came from our souls. So we believe we made the right choice. The album turned out varied and interesting, not only for a narrow, but for a wide range of listeners." 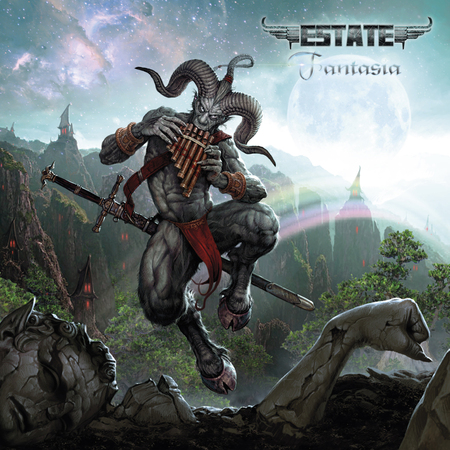 I really liked the cover, though I can't relate to the imagery. What did you tell the artist? Did you have an idea, a scetch, or was he told to make whatever he wanted? And what do you want to say with the cover, and the title?

Vadim: "We explained to our artist Leo a general essence and philosophy of the band, the concept of what we want to see and what we don't. Our wish was to draw something fabulous, magical and fantasy; to make an inspiring, interesting and exciting cover. Leo did it very well! He immediately gave us an idea. We accepted it and the cover was ready."

Dmitriy: "He drew it as he saw it after listening to some our songs in less than a week (although he is a very busy artist). He particularly singled out one of this songs (Holy Land, it seems). We just asked him to add a statue with elfin ears. Fantasia has a direct translation - a parallel world of our dreams without negative context. There are also indirect sense - a mixture of styles (why not? ..)."

You guys started out just a couple of years ago, but based on the high musical skills, I guess you have been active in bands prior to Estate?

Vadim: 2Everything is right. I played 5-6 years in the band named Present Mind and took part in a couple of other projects, but all of them were unpromising. Estate was formed of the former musicians of various bands who left their meaningless projects with the purpose to create one strong musical project."

Dmitriy: "Yes, of course. I have created a small local bands from 16 years, that is almost 19 years in a row. Also I played and sang at various city and regional music fests. I have a lot of my own music material."

I have to make a pit stop in the political corner; are you interested in politics? Being from Russia I guess you at least have some thoughts? We don't get too much information on whats going on, basically I feel Putin is trying to grow, trying to become a powerful dictator like some of the earlier russian leaders. Am I wrong?

Dmitriy: "Honestly, I don't understand what is going on in the world and in Russia. I feel only some not calm" some general hysteria. Although I'm not very interested in politics, I doubt Putin's dictatorial intentions. His motives are not entirely clear for me, but he is a very smart man, there's no doubt."

Vadim: "No, I'm not interested in politics. Not because I don't care about what's going on, but because they don't tell us the whole truth. Media provides information only as beneficial to them and to the people who stand behind them."

And how is it to be a musician, being in a band, in Russia? Difficult? Restricted? Or is it just me coloured by a narrow minded media? 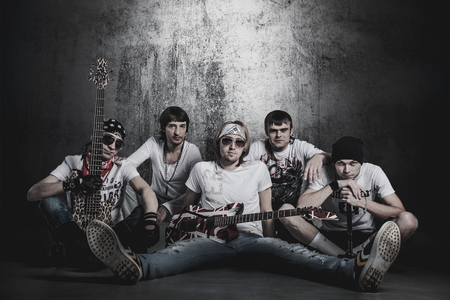 Dmitriy: "It's really difficult. Russian rock music that popular in our country is so unique and unclear for me that it is absolutely not interesting to me. This is not a kind of Western music, it's a parallel world develops its own ways and laws. In Russia, as it seems to me, people are excessively inert and they hardly accept music that differs from what they got used. Therefore, a large number of exciting young bands trying to play heavy metal, power metal, alternative, etc. are in trouble. Only a few of thousands of bands survive after adaptation of their music for local listeners. It really limits musicians. People who played well Malmsteen and Blackmore forced to play some kind of nonsense to be a little popular. The result is not a flight of fancy, but some poor mockery. Sorry if I spoke too harshly."

Vadim: "There is really difficult. We've got everything differently arranged here. Showbusiness does not work like in the West and the people here think differently. In addition, European and American trends reach us with a delay of 20 years. Our music industry, especially rock industry, is not developed properly. If you really want to achieve something you have to stand out from the crowd: to live and to think differently, to have a good understanding of western culture, to make non-Russian business activities. But difficult is not impossible. If you have a goal and persistence, the result is bound to be."

How did you get in contact with Mighty Music?

Vadim:  "We sent our demos to the labels we liked and which are stylistically and spiritually close to us. We got a lot of offers from different companies from around the world. But we eventually opted for the Mighty Music. We immediately liked them and their terms and conditions. They are very nice guys and it's very pleasant to deal with them."

And are there any plans on touring outside Russia? Plus, have you been doing a lot of concerts abroad?

Dmitriy: "Yes, of course, we have some plans on touring outside Russia. Although we haven't any experience of concerts abroad yet, but we have a good friends who got such experience. It's Overwind. Perhaps it will be a joint tour."

Just for fun, I really like doing this; can we get your five favourties bands from your national/local scene?

Vadim: "I don't accept anyone but Aria on our national rock stage. Their music is amazing and influenced us too."

Thanks for stopping by Heavymetal.no, I rally appreciate it! Any final words? Someone who deserves to get some credit? Someone in need of a good slapping? :) Heres the place to blow out some steam or hand out roses:

Vadim: "I express my gratitude to all who involved in success of our band. I wish you all live in peace and harmony!"