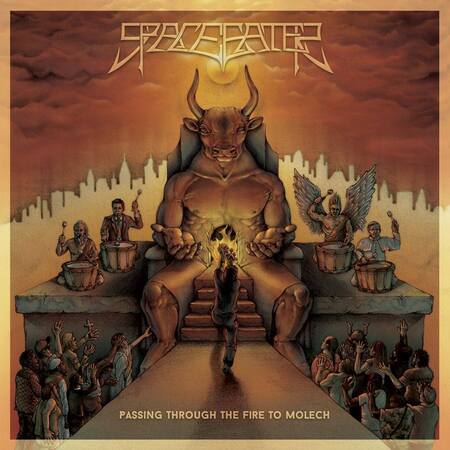 Serbian metal, man, ain't too often this happens. Welcome to Norway by the way :)

"Well, we've got a lot of great bands, but most of them just can't get a break-through. The Stone, Infest, Concrete Sun, Alitor, Centurion... Just to name a few. Thank you!"

I really liked your thrash metal, mainly because I grew up in the late 70's and was ready for the thrash scene in the early 80's. The main inspiration for Space Eater, is it based in the early 80's or the late 80's/early 90's? If at all.

"Boško wrote most of the songs for the first two albums. He listened to everything from heavy to thrash metal. He prefered bands with singing as opposed to screaming/growling and was a big fan of American speed/power metal. Myself and Karlo are big fans of the second wave of Bay Area thrash (among other things), and we're hooked on the skank beat. Tihi, on the other hand is a more death metal oriented guy, ranging from old school to modern technical stuff. The 80s scene was always a big factor for us, but we don't limit ourselves just to those bands."

I love bands like Atrophy, which I mentioned in the review, and Death Angel. Are these bands you are fans of? If not, what bands do you like and what bands are the foundation of Space Eater?

"Karlo is a huge fan of Atrophy, and we both like Death Angel, yes. For this album, the range of influences is vast. My personal favorite band is Anthrax, but you can hear a lot of Kreator, Slayer, Megadeth, Forbidden, Vio-Lence, Intruder, Overkill (the list goes on) influences on the record. However, those are just influences, we don't copy those bands, and we play our music our own way."

The production was clever, it avoided the standard use of too much, where albums are carried by a wall of sound, but where the songs may be weak underneath. All the details and aspects came across when Passing Through... made its rounds. Agree? Thoughts? Did you use any albums as pointers in the studio?

"What I would really like to state about the production is that it is completely edit and trigger free! (Yeah!!!! Yj) It's a completely natural mix, a bit squashed in the mastering process, but it is done like in the old days. There are no double vocals, no layers of guitars. Everyone plays his own instrument, as opposed to what bands are doing these days, the back vocals are even sung by Đorđe. I wanted to get the album to sound and feel something like a cross between Slayer's Diabolus in Musica and Megadeth's Endgame. I think we all love how it came out. And, now that you've mentioned it, I really hate bands that just rely on sound and production to get their music across, there are too many of those... If your music sounds great on the shittiest production ever, then you've got yourself some great songs!"

And again, Serbian metal, rare stuff for us North Europeans. How is the metal scene down there? Are the scene rich or is it difficult to obtain instruments/rehersal space etc?

"We are poor compared to west/north European standards, but we get by. We spend pretty much every dime we make on equipment. You buy yourself a middle-class instrument and in most cases, it's what you'll be playing as long as you are in the music business. And you don't really mind. There are a lot of rehearsal studios, and they aren't expensive, but we rehearse in my own studio. As for the scene, there is a lot of bands, as everywhere, but most don't last. The ones that do, however, get recognition in the local scene. Not too many clubs to support metal, however, and almost no promoters whatsoever for smaller bands, you mostly have to organize your own gigs." 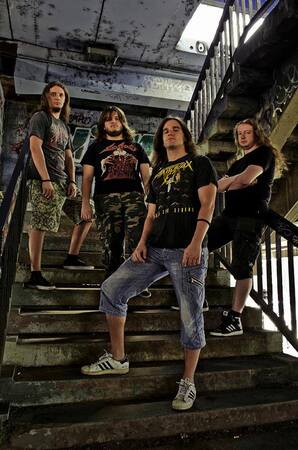 Whats life like in Serbia as a metal musician? Is it hard due to any politics?

"No, politicians don't recognize us as a threat right now. I'm sure if they did, we'd have problems. However, it's sometimes hard to get out of stereotypes, the general public opinion on metalheads here is terrible."

How did you get in touch with Pure Steel? And I guess you paid for the recording yourself, an they took care of the pressing and promo?

"Karlo was in charge of communicating with labels and he was the one to get in touch with Pure Steel Records. We didn't have to pay for the recording, since we recorded everything ourselves in my studio, I produced the record with the help from the guys and I mixed and mastered it. Tihi drew the cover picture and did the complete layout for the booklet."

Do you tour a lot? Or play gigs? And if so, is it mainly local/national or do you get to travel a lot?

"We tour and play as much gigs as we can. Unfortunately, there has been only one tour so far, last March with Infest. We have some plans for future tours, but it's too early for me to give out anything. Follow us on Facebook to stay informed! As for gigs, we play whenever someone invites us and meets our basic and humble demands. We've played a lot of gigs in the Balkans, and we've been as far as Germany."

What do you know about Norway, and the metal scene here?

"Well, I don't know much about Norway, except that you have a lot of fjords, high standards of living and suicide rates. :D As far as for the metal scene today, I pretty much don't know anything. I'm a huge fan of Mayhem, De Mysteriis Dom Sathanas is in my top 5 albums of all time, I listened to a lot of Darkthrone, used to love Dimmu Borgir and Satyricon when I was younger. You are the strongest in extreme metal bands, death and black metal, and those are genres I have yet to explore. I like taking listening to music really slow and discovering new bands, giving them months to sit in my head, one at a time. I never download music (unless the band posts their stuff for free download), or listen via YouTube. I have yet a lot to learn about the various metal scenes worldwide."

Do you think its possible for Space Eater to build a large following and get somewhere? Today the amount of bands is insane, and it usually takes more than talent to become stars. What are your ambitions?

"We're going to do our thing the best we can and try as hard as possible to achieve as much as is achieveable. And we'll se where that will take us. The problem is, everything today is pretty much run by money."

Space Eater, I didn't feel the name worked with the choice of metal, care to share the reason the band has this name?

"Boško took the name from Gamma Ray's song. I personally think it's a pretty good name, regardless of which genre it associates with. For me, it's like a machine that devours everything that crosses it's path (even though it is a metaphor for a black hole)."

Thanks a lot for your time, I really appreciate it! Do you have any final words? Anything to add? Bad or good, hate or love, heres the place to let out some steam ;)

"Thank you, appreciate being your guest! I would just like to call all metal fans to keep supporting metal, to go to gigs, concerts, festivals, buy physical copies of albums (fuck mp3!!!), and never give it up!"