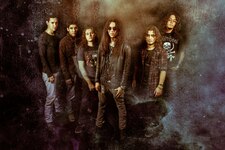 First off all, welcome to Norway! How are you guys doing?

"Hello and glad to be there… metaphorically speaking off course. We're doing good, working on our new material and rehearsing our debut, hoping to do a good amount of shows before the year is over ;)."

You decided to sign with the norwegian label Norse Music, how come? Was it Leif approaching the band or did you know of Norse and figured this was a smart move?

"We had been knocking doors everywhere to get a distribution deal; and of the ones we were offered, Leif seemed like the better deal. At the time it didn't seem like a particularly smart move we just wanted our music to reach europe; but as it turned out, maybe ending up in Norse is the best thing that could have happened to us. We're extremely enthusiastic about our art being heard and getting such nice comments over there, and part of that is thanks to the amazing job Leif's been doing."

I do hear a lot of heaviness within your material, somewhat in the vein of Savatage. You know, this epic, dark kind of power-/progressive stuff. You agree? Is Savatage a compliment or do you have other inspirations?

I didn't like all the vocal work, but generally it was a high standard throughout. Was the variation in the vocal departement deliberate? To use both a tender/lighter voice together with a mellow/dark opposite? And to incorpoate a more extreme kind?

"Yes, the ideas of grunts for some of the songs came quite naturally along the writing process, so we felt comftable putting them in the pallet; as you say, one of the more interesting things we managed to do with this mixed vocals where the contrasts or dialogues between the two styles of singing on some of the songs."

Do you have some kind of status at home? Are you considered a big deal in Colombia?

"Well, not really, but we're getting some audience here, we've played in some of the most important festivals over here; but the metal scene in general is rather poor in Colombia compared to that of Norway."

Is it easy to run a metal band in Colombia? Do you have a large range of concert halls/scenes, access to rehersal space etc?

It is not easy because of the limited scene, also high quality instruments and studios in general are pretty scarce and expensive. There are very good theaters and venues here, but local metal hardly sells tickets; and as for rehearsal space, luckily we have own a small studio in which we practice and stuff. ;)

I confess to know very little about Colombia, besides reading some stuff about drugs and gangs from time to time :) Is this a correct perception? That its alot of poverty, drugs, mafia etc? Or has the media yet again painted an incorrect image? I should know as a large amount of people belive polar bears are roaming the streets in Norway, he-he.

Well there's definitely drug related violence and organized crime in the form of mafias, but it is not as bad now as it used to be on the 80's; and major cities like Medellín are mostly peaceful; there's poverty to some extent and some of the people live in the foothills of mountains in neighborhoods that resemble Brazil's favelas, this is a developing country after all. Despite that, people here are generally more cheerful and laid back about life and are mostly hard working and the like… our coffee is pretty good too… "

What kind of topics are the lyrics based on? I did read some of it, but I didn't feel it was a clear message or meaning.

"We talk almost about anything, some stories and some more introspective themes; the album has kind of a dark mood and I would have to say that maybe self absorption and deep dwelling thoughts about an unforgiving existence on this somewhat rotten society are the roots of the lyrical work, the last song for example is a deep reflexion about time. The more cheerful songs talk about hope in the form of the mutual feelings we share and the perspective of being able to build a better future."

Is being a six pack in any way a problem? Does it create problems when decisions are to me made?

"No, I think we work pretty well and as everyone has the band on their best interests, we generally share a similar opinion on what is to be done."

I noticed five out of six are credited for making music and lyrics, how come the keyboardist ain't a part of these procesesses? And do you think the fact that so many participate is the reason your album is sounding so diverse?

"Well, having a band at this point is kind of a half time job, because of the nature of our location, we do not live from playing yet and not everyone has the time to get involved on the writing process. And yes, I do believe that are our different music backgrounds and ideas what give the band a more wider perspective when it comes to expressing ideas musically. "

Well, I'm out of time, if you have anything to confess or promote, maybe some complaints to deliver or roses to share, heres the spot :):

"We are very happy about the response we've got from Europe and are eager to keep putting out good music for you guys to rock along with us. Our second album is already on the making and we hope to release it on early 2014, so stay tuned. Hope to visit norway really soon! I would love to see some polar bears! hehehe just kidding."