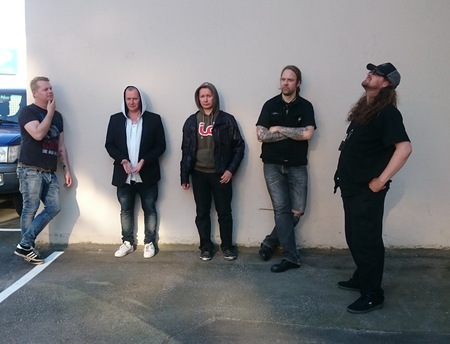 As the new vocalist, James Fogarty, is an englishman, I will (try to) run this news article in...english.

I was attending a rehearsal today, with James present and fronting the band. He came over to Norway, a five-day visit, to rehearse and get in the groove. I did know what I was in for, ‘cause I was given some recordings with James a week ago, three songs proving him worthy to replace Jan Kenneth. I can easily say to the sceptics out there that James is as close as you’ll get in recreating the classic sound and vocals from the early days, though I know no one can copy Jan Kenneth 100%. When I heard Yearning the Seeds of a New Dimension with James, I got the same chills in the opening sequence, the clean part, as I got/get when playing the album.

James’ voice suits the band, its almost spot on, got the atmospheric edge and capture the sound of those classic tracks. A tad different on the harsh vocal, but all over a kick ass vocalist delivering the goods.

James almost seemed unaffected by the expectations the band will meet. With a strong, self-confident attitude, he hammered those vocal parts, and made me eager to tell the world what’s coming. Now you know.

The terrible trio, Anders Kobro on drums, the Botteri twins on bass/guitar, sounds awesome! Just the way it should; dirty, raw and epic. Noteworthy is Christopher on bass, working hard and metal to ensure those pounding beats together with Kobro. Even Stein Roger, bass duties in the woods back on the farewell gig, and active in Green Carnation these days, stopped by the rehearsal, jamming on a couple of songs. Not sure if he will end up in the live unit though, but as the band is planning a new studio album, I know Stein Roger will show his talent together with the trees down the road in one way or another.

I got some flashbacks during the three hours I spent together with the band this evening, back to the good old days, in the early rehearsal spaces. But rather than a band evolving towards separation, I felt a fellowship, a hunger to return to the scene. If you’re doing Blasfest this February, you’ll get a set list including six classics and 4 brand new songs. I know the recording of the coming album, Pure, will start soon, looking forward to get some tasters Anders :).

For those not familiar with James, he was in the band Ewigkeit back some years, releasing albums on Metal Age Productions and Earache, these days he told me the main focus is Old Forest.

Getting there? Getting exited? I know fans of In The Woods… should. And as mentioned, Pure is up for recording soon, and keep an eye out for the incredible box set, both releases are courtesy of Debemur Morti Productions.