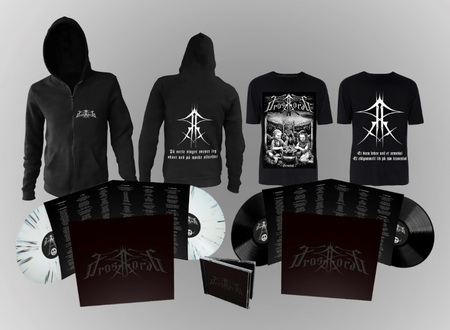 Skiva er ikke spilt inn i år, for å si det sånn: "Recorded years ago, the band has never been buried, just put on ice to be brought back to life every now and then. Last time was in 2015 at the Elements of Rock Festival in Switzerland and our own NordicFest. Only a few pre-release copies of this album was handed out at EoR. But now, the real deal is finally here and we are so proud and happy to present it to you."

Frosthardr, with their most active period around 2003-2007, was formed by Jokull in the late 90's to bring a harsh and icecold sound into the black metal scene. A scene in Norway, quite familiar with things such as church burnings and murders, these guys was more into bringing light into the darkness, a littlebit of hope but at the same time not being afraid of doing critical world observations!

Musically, this fullength is more than just black metal, with their thrash and doom influences. Larry Farkas of Vengeance Rising is even doing two guest appearances, which made these guys very happy! Epic metal blended with agressivity right in your face. Pompous, but not symphonic, chaotic but also melodic, raw but still well-done…"