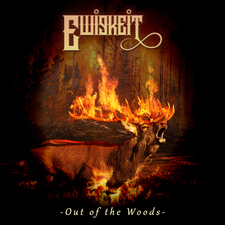 For those following the In The Woods... story, James is of course the vocalist on the last two albums by the band. There were some falling out, ending the cooperation, and these three songs were amongst five ready for an album that never happened. In The Woods... has secured a replacement, changing their style a bit, and moved on. A new album is soon ready. James decided to release the trio of songs under the Ewigkeit moniker, a band he has been doing for years.

And considering the stuff he made with Woods, the Out Of The Woods ep I feel is darker. There is a shadow hangig over the music, which I feel do remind me of some of the melodic pieces from the In The Wooods.. debut in fact. On Evergreen especially.

The Wolf Returns was a song I struggled a bit with, but it grew on me. When digging a bit, I found several pearls, the part from 00:52 and the heavy riffing following. Though it has a lot of meat, I feel it may lack some element of dynamic, some piece lifting it a bit up. Evergreen is a bit in the same vein, but this one has a Paradise Lost vibe. And the melodic voice combined with the great growl/scream vocal and the harsh extreme metal part, makes this a song to check out. The Namestealer (great name for a song!)song is a strange one, with a bit heavy hardcore vibe painted on, and the great melodic vocal, the dark and strong voice of James. The ambient mid section and the simple and effective guitar solo tops it off, securing the ep varitaion.

It isn't too far between James' Woods era and the last two Ewigkeit albums, and the three songs could easily have been released under either.

The ep marks the definite end for James and the trees, now he looks forward and is soon ready with the debut album from Nattehimmel. And more. An interview is queued, asap when its ready.

Points? Grade? Don't know, usually I don't feed numbers to eps and singles, it is just not enough material for me to find a fair conclusion. Read the text, listen to the songs several times, and make up your own mind.