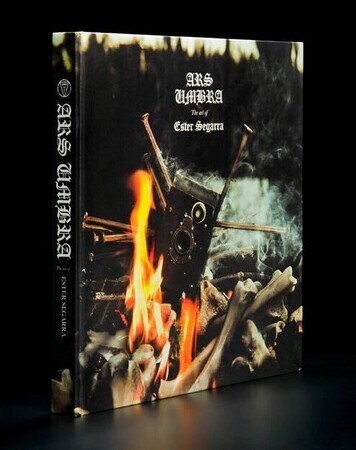 "I’ll be attending Tons of Rock at the end of this month, exhibiting and promoting an anthology of my work that I released via Season of Mist" forteller Ester til Heavymetal.no. Fotografen er velkjent og har en bra cv.

Boken, ARS  UMBRA: the Art of Ester Segarra, inkluderer også  "...an original  soundtrack. Understanding the umbilical link between visual art and music, Ester commissioned a soundtrack to accompany the book. It is as much a historical document in extreme music, as it is a  piece of art in itself. Inspired by a Macumba ritual she attended, the instrumental soundtrack was written and performed by Uno Bruniusson (ex-In Solitude, Death Alley, Procession); it provides a unique rhythm and adds another layer of artistry to the whole Ars Umbra experience."

"Containing over 150 photographs, spanning over 100 bands - with accompanying texts written by the featured musicians, detailing the stories behind many of the pictures - Ars Umbra beautifully captures the energy of an important part of heavy metal history."

Om forfatteren/fotografen: "Segarra is a renowned music photographer, who has been an integral part of the worldwide heavy music landscape for over 15 years. Born in Barcelona, Spain, and now dividing her time between London and Stockholm, the internationally-acclaimed artist’s inimitable style transcends music photography.

Segarra’s multitude of photos have been featured in every major metal magazine, internet resource, and a wide array of critically acclaimed albums, her standout images becoming the cornerstone of the visual identity of such bands as Mayhem, Darkthrone, Watain, Abbath, Rotting Christ, Electric Wizard, and many more."

A special edition limited to 500 copies worldwide, comes  packed in deluxe box stamped with silver hot foil with the soundtrack is  presented on black 12" vinyl with etched B-side."